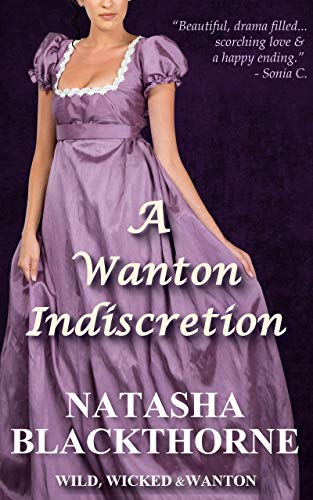 He is her most wanton indiscretion. She is his brightest hope for redemption.

They warned he was a seducer and a scoundrel. To Miss Abigail Francis, Mr. Isaac Pierce is an enticing temptation. But she doesn’t dare succumb. She had to give up on romance the day her widowed mother died, leaving the care of her young half-siblings in her hands. So she used the excellent education her mother had provided for and the help of a powerful benefactor to become a governess to one of Philadelphia’s finest and wealthiest families.

Even a breath of scandal, however, could destroy the security she’s attained for herself and her orphaned siblings. But there is something about the ever-so-charming merchant prince that calls to the wild side she has tamped down beneath a mantle of modesty and propriety. Abigail knows she must heed the warning, that she must ignore him. If she could only ignore her wayward, wanton thoughts….

Isaac Pierce is jaded, and he’s the first to admit it. Women come easily to him. Perhaps too easily. So when the raven-haired governess next door snubs his practiced advance, it pricks his pride. And piques his interest. What begins as just another conquest, albeit one a little more challenging than he’s become accustomed to, soon contradicts everything he’s learned about women.

Abigail isn’t playing a sophisticated game of advance and retreat to whet his interest. She’s fiercely committed to her family and determined to protect her position. He begins to admire her strength of character. When he’s with her, he begins to believe that he could become a better man for her. It isn’t long before his desire to possess becomes more. But how can they have more? Not only their social positions separate them, but her loyalty to her family.

To have her, he’d risk the final damnation of his soul — but is he willing to risk the utter destruction of everything he’s ever longed for?

"I loved everything about this book… lots of secrets revealed, surprises and interesting characters… beautiful, drama filled, with scorching love scenes and a happy ending."
~ Sonia N.

"I loved reading this sexy romance. It has spice, it has suspense and it has romance."
~ Tanya R.

"If you like well written romances with a spicy touch, then you’ll love ‘A Wanton Indiscretion’…"
~ Nicole L.

"Abigail & Isaac make a great couple. Both overcome past hurts & preconceived notions to find their one true love."
~ Billie B.

"Wonderful characters who will capture you with their passionate desires and hopes for love, home and family…An excellent story I loved…"
~ Debbie B.

Reader Advisory: A Wanton Indiscretion contains aspects of devastating grief and loss in the backstory.

For Once in My Life: An absolutely perfect laugh out loud romantic comedy