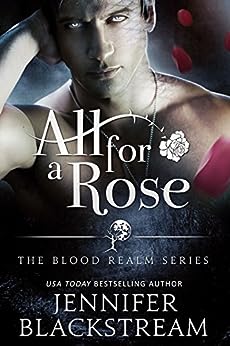 He’s neither man nor beast.

She can’t escape him…and she doesn’t want to.

A witch’s curse took everything from Damon. Once a protector of the weak, the dragon shifter is now trapped between forms, a half man-half beast. A monster rejecting human contact.

Until a trespasser collapses on his doorstep. And not just any trespasser…

The father of the witch who cursed him.

Maribel wants out of her sister the witch’s shadow. Even taking her her father’s place as a draconic lord’s prisoner feels like freedom compared to a life that revolves around someone else. Besides, Daman doesn’t scare her.

Damon is furious when he finds he’s bargained for the wrong sister. But Maribel’s determined joy and refusal to turn away from him slowly creeps past his defenses. Soon Damon finds himself falling under a spell of an entirely different nature.

Now he has a decision to make.

Will he choose love?

Start the Blood Realm series now, with All for a Rose.

Because you’re going to love this beast…

Blood of Angels (Halfway Between Book 2)