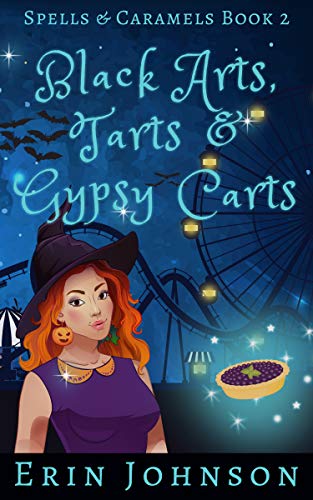 A carnival bakery booth. A deadly magic show. Is it the perfect recipe for murder or a clever sleight of hand?

Palace pastry chef Imogen is struggling to control her newfound magic and her potent feelings for the prince. So when the carnival rolls into the kingdom, she jumps at the chance to run the royal bakery booth. But her plan to escape her problems backfires when murder rocks the magician’s table… and her dear friend is found holding the bloody saw.

Determined to cook up a way to keep Rhonda out of witch’s prison, she sifts through the clues and the long list of suspects. Between devious dark magicians, cagey stage assistants, and a strongman with more to offer than just muscles, everyone at the fairgrounds seems to be hiding secrets—even Rhonda.

With the final night of the carnival approaching, will Imogen’s shaky powers be enough to flush out the murderer before her good friend ends up on the chopping block?

Buy Black Arts, Tarts & Gypsy Carts to fall under the spell of a festive mystery today!

"Imogene is such a fun character to follow… I liked this book (#2 in the series) even more than I liked the first! I have a feeling they are going to get better and better…" ★★★★★ from Morgan

"Be sure to clear your schedule before you start reading, because you won’t want to put it down. Erin’s vivid writing paints pictures in your mind and creates aromas in the air" ★★★★★ from Bubbles78