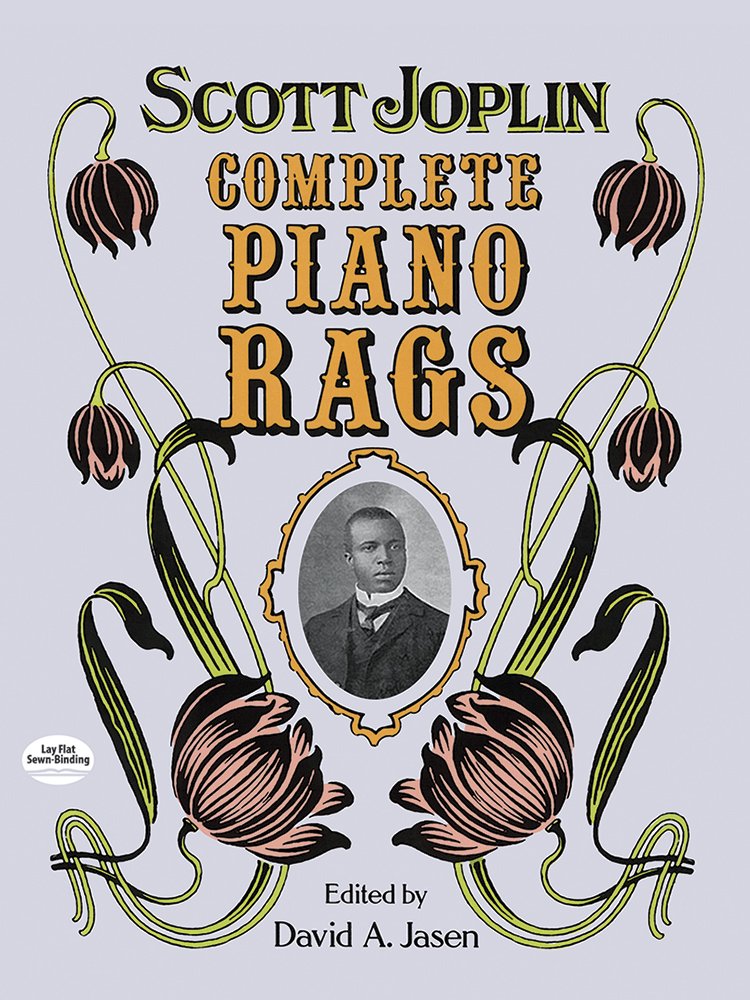 Throughout history, few musical crazes have hit with such impact, had such a heyday and lingered so hauntingly as ragtime. Ragtime arrived on the upswing of Tin Pan Alley, when the popularity of pianos in the home was reaching its peak and an endless stream of sheet music flowed out to meet the demand. In the early 1900s, no name was more prominent on those sheet-music covers and no one wrote ragtime music more brilliantly than Scott Joplin.
This wonderful book brings together in one superbly produced playing edition all thirty-eight of Scott Joplin’s piano rags, including his six collaborations, plus Joplin’s own primer on how to play ragtime, the “School of Ragtime.” Each rag has been reprinted, along with its sheet-music cover, from the original publisher’s edition.
At the Williams’ Brothers saloon in Sedalia, Missouri, Scott Joplin was known as “The Entertainer,” and in 1897, in the upstairs room called the Maple Leaf Club, he wrote the rag that would one day be the first to sell over a million copies in sheet-music form. In time the “Maple Leaf Rag” also became the most recorded composition on piano roll, with forty known versions.
Most of Joplin’s other rags were hits as well. Many bear the playful names that were given most rags, names like “The Strenuous Life,” “Heliotrope Bouquet,” and his last published piece, the “Silver Swan Rag.” One of them, “The Entertainer,” triggered a major revival of interest in his work when it was incorporated into the score of the popular film The Sting. All of them are here, each bearing the mark of Joplin’s supreme originality. As ragtime authority David A. Jasen observes in his Introduction: “For pianists everywhere, this folio contains ragtime masterpieces which, when learned, will provide unlimited joy.”

The King Of Ragtime

Played an essential role in the development of ragtime music.

Opened the door for other black musicians and artists to succeed in a racially segregated nation.

Contains all thirty-eight of Scott Joplin’s piano rags, including his six collaborations, plus Joplin’s own primer on how to play ragtime, the “School of Ragtime.” Each rag has been reprinted, along with its sheet-music cover, from the original publisher’s edition. (0486258076)

Scott Joplin’s popular piano rags inspired him to go on to composition on a larger, far more developed scale and conception. His second opera, Treemonisha, an example of his most serious work, was published in 1911 at his own expense. The work was a blueprint for social, racial, and sexual equality. The opera became Joplin’s obsession, taking precedence over his other creative efforts while tragically affecting his health and fortune. (0486416887)

25 of the most famous rags, several of which cannot be found elsewhere. Written during ragtime’s golden age from 1904 to 1910, these melodies include three of Scott Joplin’s finest works — Searchlight Rag, Rose Leaf Rag, and Fig Leaf Rag — plus songs by Tin Pan Alley’s hottest composers of the day: George Botsford, Harry Armstrong, and Egbert Van Alstyne. (0486252485)

This collection of the best piano rags recaptures the lively mood of the ragtime era. Fifty rags include melodies by such masters as Scott Joplin, James Scott, and Joseph Francis Lamb, and such pieces as The Entertainer — A Rag Time Two Step, Agitation Rag, Possum and Taters, Maple Leaf Rag, Elite Syncopations, The Cascades — A Rag, The Chrysanthemum — An Afro-American Intermezzo, Swipesy Cake Walk, American Beauty, Ragtime Nightingale, Bohemia Rag, and many more. (048647397X)

Rags And Ragtime: A Musical History

The definitive history of ragtime music and its composers.. The authors trace the growth and diversification of ragtime from its earliest beginnings in the late nineteenth century through its heyday in the Folk, Classic, Popular, Novelty, and Stride Ragtime periods to its current revival. Forty-eight major composers are discussed, including Scott Joplin, Zez Confrey, Jelly Roll Morton, Fats Waller, and many other greats. In addition, 800 important rags are profiled, most of them bearing the carefree titles that were part of the tradition, titles like “Canned Corn Rag,” “Bantam Step,” “Too Much Raspberry,” “Ragging the Scale,” and “Red Onion Rag.” Each profile includes date of publication, original publisher, a discography, and a commentary of the unique character and appeal of each rag. (0486259226)