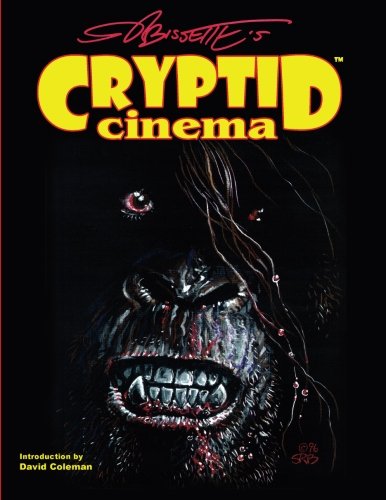 Awarded Best Popular Culture Cryptid Book of the Year in the Top Ten Best Cryptozoology Books of the 2017 by America’s Premiere Cryptozoologist Loren Coleman (at cryptozoonews)!

Enter, if you dare, the realm of Cryptid Cinema™…the Movie-land of Sasquatch, Bigfoot, Bayou Beasts, Backwoods Bogeymen and Bloodwater Brutes!

From filmland’s fear & fun-filled real & ‘reel’ history, SWAMP THING artist & CONSTANTINE co-creator Stephen R. Bissette (Rondo Award ‘Monster Kid Hall of Fame’ winner, 2012) presents an astonishing, fully-illustrated menagerie of monstrosities, curiosities, and wild & woolly weirdos from the 1950s to the present day! In these pages, you’ll find celluloid and TV incarnations of ‘real world’ cryptids like the Yeti, Sasquatch, and the Jersey Devil, ‘reel world’ critters from THE KILLER SHREWS to the Demogorgon of STRANGER THINGS, and all manner of bizarre swamp-and-bayou beings from the Gillman to the Nutria-Man, from the reviled CREATURE to the revelatory THE SHAPE OF WATER.

CRYPTID CINEMA™ covers cryptid appearances in TV series from ONE STEP BEYOND to STRANGER THINGS (offering a complete ‘study & viewing guide’ to the first season), as well as comic books, toys, action figures, and other media. In these pages, you’ll meet a host of eccentric creators like (and the creations of) H.P. Lovecraft, Ron & June Ormond, Jerry Warren, Arthur C. Pierce, Virgil W. Vogel, Janos Prohaska, and others, on up to today’s trail-blazers like Kevin Smith, Stefan Avalos, Lance Weiler, and the Duffer Brothers!

This isn’t a comprehensive guide or history book—it is an illustrated celebration of Cryptid Cinema™ via in-depth essays on a few favorite (and often long-forgotten) film fiends, designed and written for older readers (there is some mature content in this first volume, given the nature of the 1960s and 1970s Bigfoot novels, movies and comics). Independent filmmakers and low-budget ‘grindhouse’ and drive-in exploitation features are given special attention, as are the first-ever Bigfoot documentaries. Read about the stop-motion animation ‘amateur’ movie that could, EQUINOX; the behind-the-scenes secrets of the rare direct-to-video Upper New York State gem THE GLASSHEAD; the backstories behind the Swedish-American extraterrestrial Yeti opus TERROR IN THE MIDNIGHT SUN, the made-in-Florida Walking Catfish-Man epic ZAAT (aka BLOOD WATERS OF DR. Z), and the surgically-created Walrus-Man movie, TUSK!

This jam-packed 245-page extravaganza is just the first in a series of books on Cryptid Cinema™ and Paleo Pop™ Culture from an author and artist who knows & loves monsters!

Reiki and Children: A Selection of Articles from Reiki News Magazine