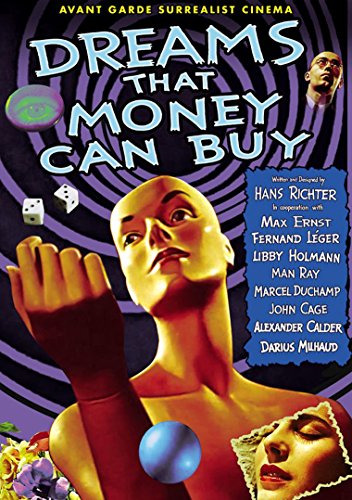 From the creative imagination of Hans Richter comes the surrealist masterpiece Dreams That Money Can Buy. Joe, a heartbroken World War II veteran and starving artist, signs a lease on an expensive room. Paying rent is impossible until he realizes he possesses the ability to reveal anyone’s fondest desire. Soon the public is stampeding his door to learn their innermost wish, and Joe discovers that money is no object. His clients’ fantasies are revealed in segments directed by Max Ernst, Fernand Léger, Man Ray, Marcel Duchamp, Alexander Calder, and Hans Richter. Accompanying music is provided by luminaries including Paul Bowles, Libby Holman, Darius Milhaud, John Cage, and Louis Applebaum. The combination of breathtaking imagery and music makes Dream That Money Can Buy an unforgettable experience. Hans Richter (1888-1976) joined the Dada art movement after his traumatic experiences in World War I. Experimenting with film, he created one of the first abstract works of the cinema, Rhythmus 21 (1921). His later short Ghosts Before Breakfast (1928), in which inanimate objects rebel against their owners, so impressed German critics that it was shown before prestigious UFA productions. In 1929, Richter founded the German League for the Independent Film to fight against censorship and the rumblings of war in his own country. He was unsuccessful in this regard, and in 1940 emigrated to America to escape Nazi persecution. Settling in New York, he ensconced himself in the avant-garde scene in Manhattan, making connections with many of the artists who would assist him on Dreams That Money Can Buy. Dreams would be the crowning achievement of Richter’s American sojourn, winning the award for Best Original Contribution to the Progress of Cinematography at the 1947 Venice Film Festival.

EVERYTHING YOU NEED TO KNOW ABOUT AMAZON PRIME: Tips and Tricks To Get The Most Out Of Your Amazon Prime Membership