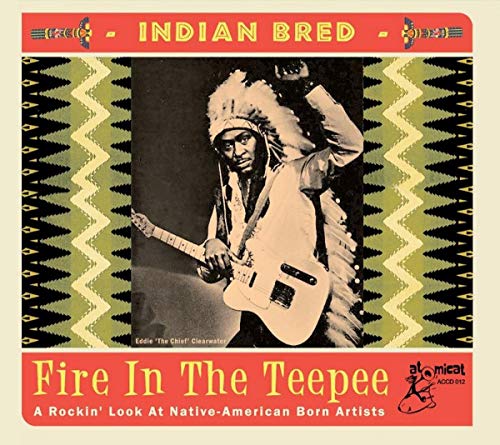 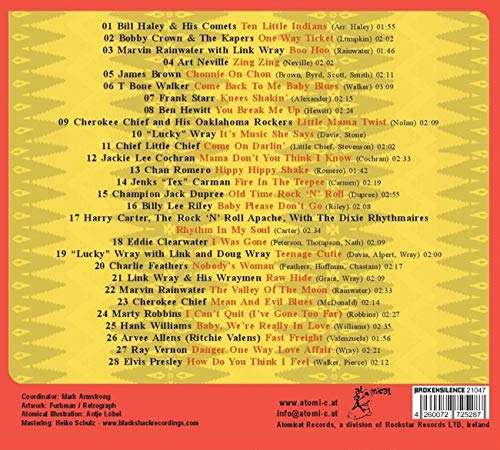 Indian Bred’, ‘Fire In The Teepee’ (Atomicat ACCD012) is the first of five albums in an Atomicat series and inaugural album will look at Native- American born performers. Unquestionably, information is conflicting, and thankfully numerous artists openly acknowledged their birth heritage, most certainly Link Wray and his brothers Doug, Ray and Vernon. Some heritage for example Marvin Rainwater’s is visual from his clothing and in his name and implies Native-American identity. In Rainwater’s own words I’ve got a little bit of Cherokee blood….. Jenks Tex Carman wore an Indian headdress on stage and claimed to be of Cherokee blood. However, research cannot verify his Native-American connection, and he is featured as an oddment in our album. The list of native descendance is long and includes; Champion Jack Dupree, James Brown, Eddie Clearwater, Chan Romero, Charlie Feathers and from the 1970s onwards Jackie Lee Cochran used the Native- American version of his name on his recording. The opening recording from Bill Haley and His Comets is titled Ten Little Indians we have twenty five ‘Indian Bred’ artists on ‘Fire In The Teepee’ (Atomicat ACCD012). There are informative sleeve notes offering different and interesting information on each album. This ‘Atomicat’ album is compiled by well-known Dee Jay and face on the music scene Mark Armstrong, who has been Dee Jaying since his early teen years. Every album has; stunning design, sleeve notes, 28 songs, mastered for the best possible sound. The disc is housed in an attractively designed cardboard sleeve, specially designed to avoid the use of plastic and be environmentally friendly. The albums are great to play at home and perfect for Dee Jays who within these CD albums will find good dance-floor filling songs.