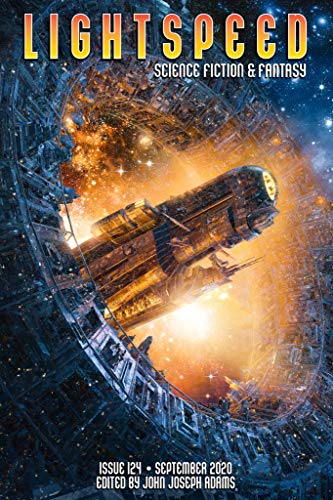 LIGHTSPEED is a digital science fiction and fantasy magazine. In its pages, you will find science fiction: from near-future, sociological soft SF, to far-future, star-spanning hard SF—and fantasy: from epic fantasy, sword-and-sorcery, and contemporary urban tales, to magical realism, science-fantasy, and folktales.

A 12 month subscription to LIGHTSPEED includes more than 100 stories (around 700,000 words of fiction). In each issue, you will find nine pieces of short fiction (eight short stories or novelettes, plus one novella) from a variety of authors—from the bestsellers and award-winners you already know to the best new voices you haven’t heard of yet. Some of the authors we’ve published over the years include Stephen King, George R.R. Martin, Ursula K. Le Guin, Neil Gaiman, N.K. Jemisin, Ted Chiang, and Ken Liu, to name but a few.

In addition our short fiction offerings, LIGHTSPEED also offers a variety of nonfiction features, including feature interviews, Q&As with our authors that go behind-the-scenes of their stories, book and media reviews, and more.

Launched in 2010, LIGHTSPEED is a two-time winner of the Hugo Award, and stories from the magazine have been nominated for major genre awards dozens of times, including the Hugo Award, the Nebula Award, the World Fantasy Award, and the Theodore Sturgeon Award. Our editor, John Joseph Adams, has been nominated for the Hugo Award twelve times and the World Fantasy Award eight times, and in addition to editing LIGHTSPEED he’s also edited more than thirty anthologies (including WASTELANDS and THE LIVING DEAD) and serves as series editor of BEST AMERICAN SCIENCE FICTION AND FANTASY.

Good and Mad: The Revolutionary Power of Women’s Anger