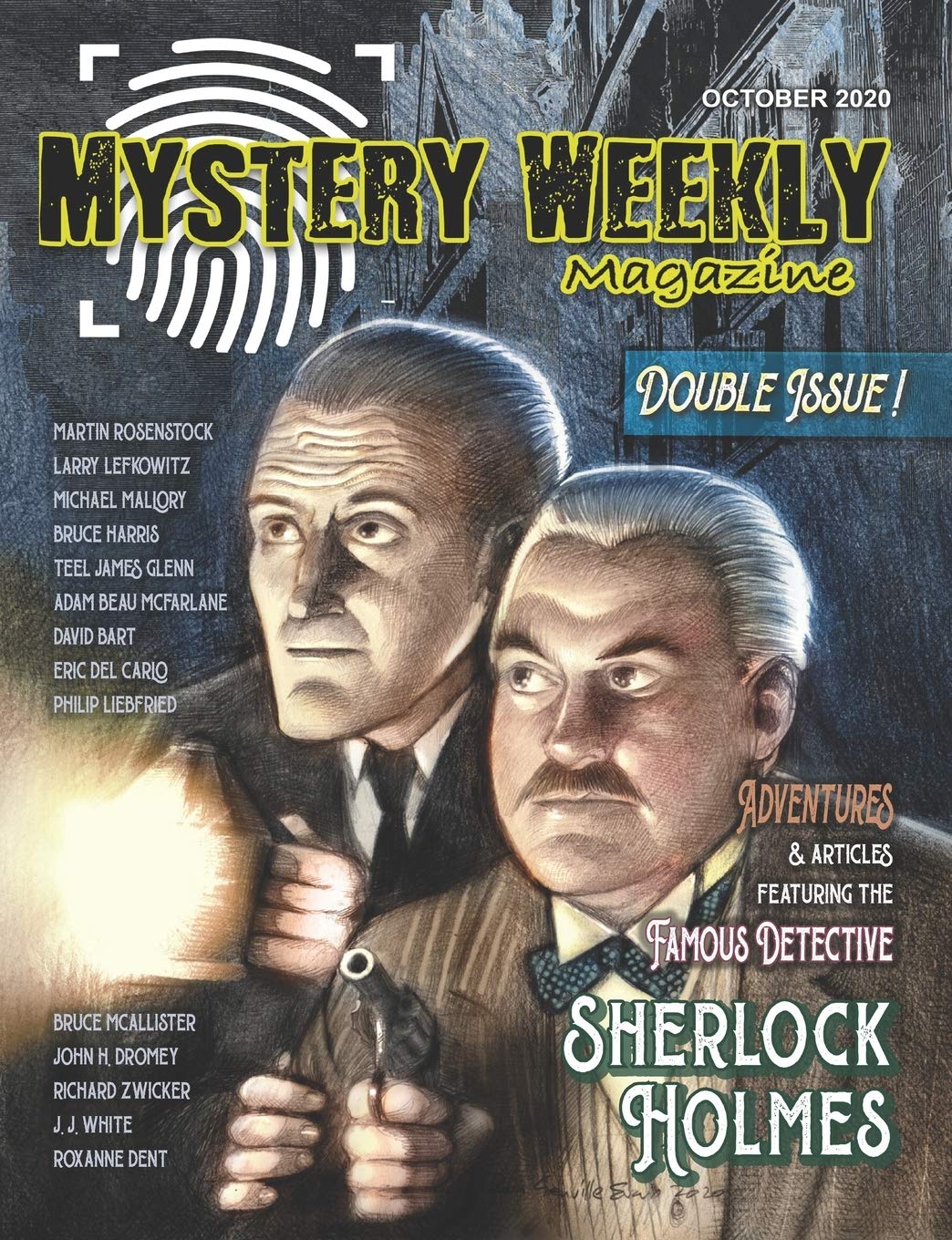 Our annual Sherlock Holmes themed double issue is stuffed full with pastiches, parodies and articles.
“The Case Of The Count Of Saint Germain” by Martin Rosenstock: War is on the horizon, and the German ambassador narrowly escapes an assassin in London. Sherlock Holmes and Dr. Watson must investigate, and encounter the immortal Count of Saint Germain.
“The Case Of Vigor, The Hammersmith Wonder” by Larry Lefkowitz: Holmes and Watson must solve a locked room mystery with seemingly no clues.
“The Adventure Of The Turned Tables” by Michael Mallory: It is the Diamond Jubilee celebration of Queen Victoria, and Sherlock Holmes discovers a series of puzzling crimes he can only explain in one way: the late, not lamented Professor Moriarty, who presumably died six years earlier, has returned.
“The Adventure Of Sherlock Hominid” by Teel James Glenn: A talking chimpanzee who travels to alternate relies uses deductive reasoning to solve a locked room murder à la Sherlock Holmes!
“The Baker Station Irregulars” by Eric Del Carlo: On a space station a Holmesian character tries to unravel the events which led to the murder and mutilation of a famous pugilist.
“Strangers In Blood” by Adam Beau Mcfarlane: The children of Sherlock Holmes and Dr. Watson live in Jazz Age New York City. They’re hired to investigate a seance.
“A Clockwork Crook” by John H. Dromey: A Victorian damsel is in distress. Can a steampunk professor and an opera singer come to her rescue in time?
“The Case Of The Burnt Wires” by J.J. White: Dr. Watson narrates a lost case that could not be revealed until Mr Sherlock Holmes’s death.
“The Affair Of The Heart” by Teel James Glenn: Holmes and Watson are not he scene when a young man has a heart attack on a train—but was it natural?
“Death And The Doctor” by Adam Beau Mcfarlane: In New York City during the Jazz Age, the children of Sherlock Holmes and Dr. Watson solve a murder. Did a malevolent soul hide behind the exterior mask of a well-schooled gentleman?
“The Silent Sherlock” by Philip Leibfried: This is an article telling of all the silent film adaptations of Sherlock Holmes. It includes American and foreign films.
“Beggars Can Be Choosers” by Bruce Harris: This Sherlock Holmes essay examines Hugh Boone, the street beggar in ‘The Man With The Twisted Lip’.
“Nevermore” by David Bart: In this Poe-ish tale, Lyle Scoggins is a veteran, a cat owner and a successful crook. So, why do they want him dead?
“Birthday Party” by Bruce McAllister: The self-aware artificial intelligence that runs the superyacht of a billionaire who just died hosts a birthday party for him anyway—one with a special theme.
“What Lies Beneath The Bandages” by Richard Zwicker: The monster of Frankenstein has returned to Geneva and reinvented himself as a consulting detective. His motto: no case too monstrous. That remains to be seen when his client is attacked by a mummy.
“Mark Of Shame” by Roxanne Dent: Smart but saddled with a new partner he resents, Detective Martinez investigates the death of a Halloween fanatic in an upscale Massachusetts community.
And we have the special Sherlock Holmes themed “Thiefsgiving”: A You-Solve-It by Laird Long.
Basis Rathbone and Nigel Bruce custom cover art by the talented Robin Grenville-Evans.
Tags: Issues, Magazine, Mystery, October, Weekly