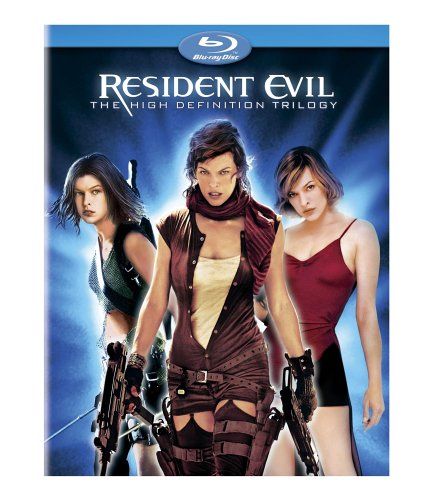 Resident Evil
Something rotten is brewing beneath the industrial mecca known as Raccoon City. Unknown to its millions of residents, a huge underground bioengineering facility known as The Hive has accidentally unleashed the deadly and mutating T-virus, killing all of its employees. To contain the leak, the governing supercomputer, Red Queen, has sealed all entrances and exits. Now a team of highly-trained super commandos including Rain (Michelle Rodriguez – The Fast and the Furious, Girlfight), Alice (Milla Jovovich – The Fifth Element) and Matt (Eric Mabius – Cruel Intentions) must race to penetrate The Hive in order to isolate the T-virus before it overwhelms humanity. To do so, they must get past the Red Queen’s deadly defenses, face the flesh-eating undead employees, fight killer mutant dogs, and battle The Licker, a genetically mutated savage beast whose strength increases with each of its slain victims.

Resident Evil: Apocalypse
After narrowly escaping the horrors of the underground Hive facility, Alice (Milla Jovovich) is quickly thrust back into a war raging above ground between the living and the Undead. As the city is locked down under quarantine, Alice joins a small band of elite soldiers, led by Valentine (Sienna Guillory, Love, Actually) and Carlos (Oded Fehr, The Mummy Returns), enlisted to rescue the missing daughter of Dr. Ashford, the creator of the mutating T-virus. It’s a heart-pounding race against time as the group faces off against hordes of blood- thirsty zombies, stealthy Lickers, mutant canines and the most sinister foe yet. Written and produced by the visionary director of Resident Evil, Paul W.S. Anderson (Alien Vs. Predator) and directed by Alexander Witt, Resident Evil: Apocalypse is a superior sci-fi suspense sequel.

Resident Evil: Extinction
Milla Jovovich is back in the third chapter of the hugely successful Resident Evil franchise. This action-packed horror film is set in the Nevada desert and filled with intense special effects and more zombie terror.
Las Vegas means fun in the sun. Well? at least the sun is still there. Except for a few rusting landmarks, it looks pretty much like the rest of the desert – or the whole country, for that matter. The crowds are now flesh-eating zombies: the mass undead, the oozing, terrifying sludge of what remains. Here, the newly upgraded Alice, along with her crew (Oded Fehr, Mike Epps, Ali Larter, Ashanti) will make a final stand against evil – with one goal: to turn the undead dead again.