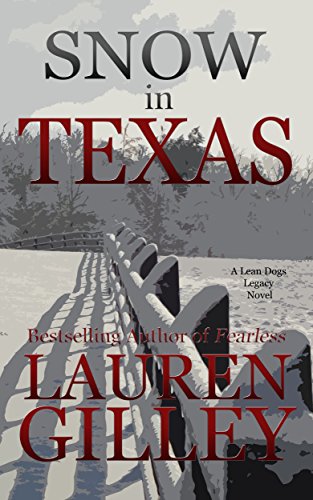 From the author of FEARLESS, the first in a new Dartmoor spinoff series:

Colin O’Donnell grew up in a lie, believing the man who raised him was his father, stirring up hell in the Louisiana bayous. A shocking revelation about his parentage led him to his half-brother…and his half-brother’s motorcycle club. Now Colin is a prospect for the Lean Dogs MC, and he’s just been transferred from his home town of New Orleans to Amarillo, Texas, where Vice President Candyman runs a tight ship, and holds tight secrets.

Jenny Snow has spent the last seven years in limbo, waiting for the pain to recede, when she unwittingly catches the eye of the club’s newest prospect. She doesn’t have the time or patience for a biker in her life. If only she can convince herself she truly believes that.

SNOW IN TEXAS is the first installment of Lauren Gilley’s new Lean Dogs Legacy Series, and features characters first introduced in her Dartmoor Series. Be sure to look for the Dartmoor novels FEARLESS, PRICE OF ANGELS, HALF MY BLOOD, THE SKELETON KING, and SECONDHAND SMOKE. Visit her at “Lauren Gilley – Author” on Facebook, at hoofprintpress.blogspot.com, or drop her a line at authorlaurengilley@gmail.com.