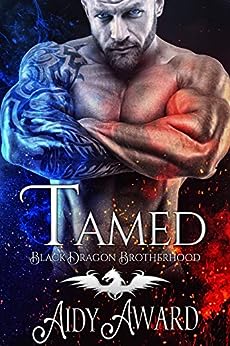 He has a darkness in his soul that he doesn’t know if he can contain. She’s smart as hell, or maybe she’s actually from Hell.

Neo can’t lead the Black Dragon Brotherhood in their fight against evil if he can’t get back to their headquarters in Rogue with news of the newest threat from Hell – shadow warriors.
His best bet is the luscious, curvy fire witch who doesn’t seem to know how to use her powers, but has the tainted human lawmen running in circles with her sexy-as-hell smarts.
When her powers surface and bring the shadow demons and their human minions down around them in force, he must choose.
Save his one true love, his fated mate, the woman who can redeem his own soul, or save the world.

Grab the first book in an explosive new series from the author of Dragons Love Curves to get your fun action-adventure curvy girl and dragon shifter romance fix!

*Part of this story were previously published as A Touch of Fate. This new full-length novel version re-imagines the Fated For Curves series with dragons as the heroes.

***
Here’s a taste of Neo and Kady’s first meeting for you!

Kady glanced over her shoulder, through the destruction his crash had caused. “Ah crap. They’re coming.”

“Who?” He couldn’t believe a lovely creature like her had come across the shadow before and lived to tell the tale.

“The men in black, the CIA, the alien abductees, take your pick. But whoever it is won’t be good. They’ll turn us both into experiments.” She chewed on her lip and Neo wanted to suck it from beneath her teeth.

Allowing humans to get involved in the Black Dragon Brotherhood’s business had cluster written all over it. There was too much at stake to let any non-supernatural beings interfere. His dragon wavered at the edge of shifting, ready to heal his wounds and take control. It waited, not wanting to scare the woman away. “I will fight them off, defend you.”
Just as soon as he could stand.

“Yeah, I don’t think so. Can you get up? Maybe lean on me and we can hide you in my house until the hubbub is over. Although, you might crush me. Geez, you’re big.” She covered her mouth with both hands. “Oops, sorry. I did not mean to say that out loud. But seriously, if you don’t want to be experiment six-two-six or butt-probed, we’ve got to get a move on.”

“Probed?” What sort of people were these men in black?

“Oh, wait. That’s what the aliens do. If I take you in, you have to promise not to put anything near my bum.”

She wagged her finger at him. “I promise not to put anything near your luscious rear-end unless you ask me to.” He blinked and swallowed. How had that popped out of his mouth?