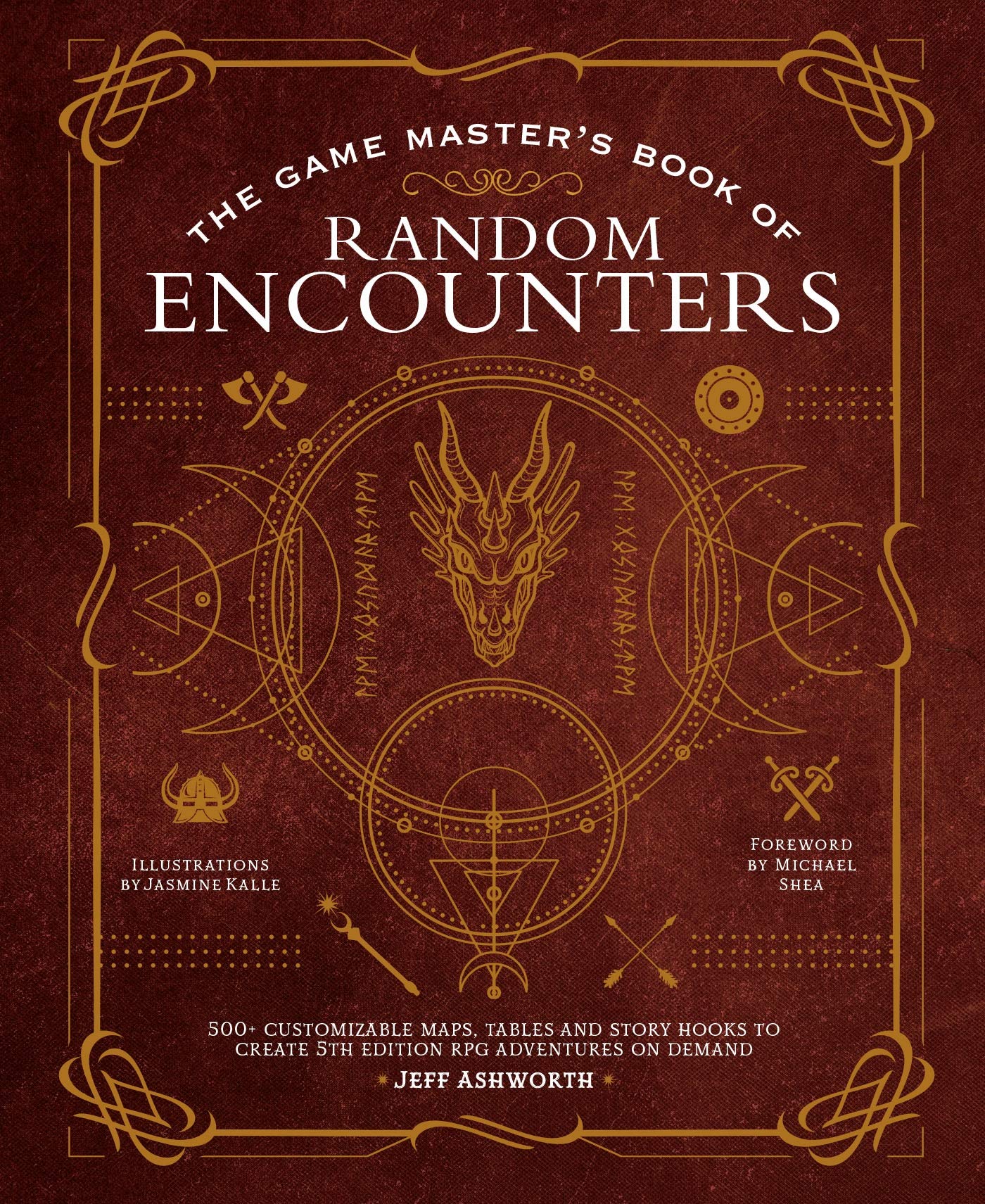 For many tabletop RPG players, the joy of an in-depth game is that anything can happen. Typical adventure modules include a map of the adventure’s primary location, but every other location?whether it’s a woodland clearing, a random apothecary or the depths of a temple players elect to explore?has to be improvised on the fly by the Game Master. As every GM knows, no matter how many story hooks, maps or NPCs you painstakingly create during session prep, your best-laid plans are often foiled by your players’ whims, extreme skill check successes (or critical fails) or their playful refusal to stay on task. In a game packed with infinite possibilities, what are GMs supposed to do when their players choose those for which they’re not prepared?

The Game Master’s Book of Random Encounters provides an unbeatable solution. This massive tome is divided into location categories, each of which can stand alone as a small stop as part of a larger campaign. As an example, the “Taverns, Inns, Shops & Guild Halls” section includes maps for 19 unique spaces, as well as multiple encounter tables designed to help GMs fill in the sights, sounds, smells and proprietors of a given location, allowing for each location in the book to be augmented and populated on the fly while still ensuring memorable moments for all your players. Each map is presented at scale on grid, enabling GMs to determine exactly where all of the characters are in relation to one another and anyone (or anything) else in the space, critical information should any combat or other movement-based action occur.

Perhaps more useful than its nearly 100 maps, the book’s one-shot generator features all the story hooks necessary for GMs to use these maps as part of an interconnected and contained adventure. Featuring eight unique campaign drivers that lead players through several of the book’s provided maps, the random tables associated with each stage in the adventure allow for nearly three million different outcomes, making The Game Master’s Book of Random Encounters an incredible investment for any would-be GM. The book also includes a Random NPC Generator to help you create intriguing characters your players will love (or love to hate), as well as a Party Makeup Maker for establishing connections among your PCs so you can weave together a disparate group of adventurers with just a few dice rolls.

Locations include taverns, temples, inns, animal/creature lairs, gatehouses, courts, ships, laboratories and more, with adventure hooks that run the gamut from frantic rooftop chases to deep cellar dungeon-crawls, with a total of 97 maps, more than 150 tables and millions of possible adventures. No matter where your players end up, they’ll have someone or something to persuade or deceive, impress or destroy.

As always, the choice is theirs. But no matter what they choose, with The Game Master’s Book of Random Encounters, you’ll be ready.

There’s a Riot Going On: Revolutionaries, Rock Stars, and the Rise and Fall of the 60s