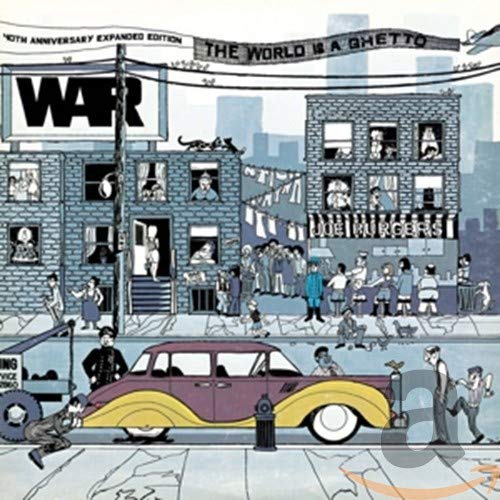 War was the original jam band, their music a thick stew of stone funk, old school R&B, Latin rhythms, free-form jazz and an uncanny pop sensibility. They had broken through in 1970 with "Spill The Wine," a hit collaboration with Eric Burdon, and by 1972 War was poised to become one of the biggest bands in the land. Their late ’72 album release The World Is A Ghetto, led by the title track and the smash hit "The Cisco Kid," took off and became the best-selling pop album of the following year.

To celebrate its place in pop music history, Avenue Records and UMe present The World Is A Ghetto: 40th Anniversary Expanded Edition, featuring a remastered version of the album newly remastered for the first time in 20 years and four unreleased bonus "Ghetto Jams" that showcase more of the group’s versatility: "Freight Train Jam," a chugging tour-de-force in the vein of the album’s cinematic "City, Country, City"; "58 Blues," a down-home blues jam; "War Is Coming," a scalding rock-blues version of a funk jam issued five years later; and a mesmerizing, early rehearsal take of "The World Is A Ghetto." All of the music was sourced from the original master tapes, provided by the group’s original co-producer Jerry Goldstein. Also included is a booklet with a new essay and detailed recording information.