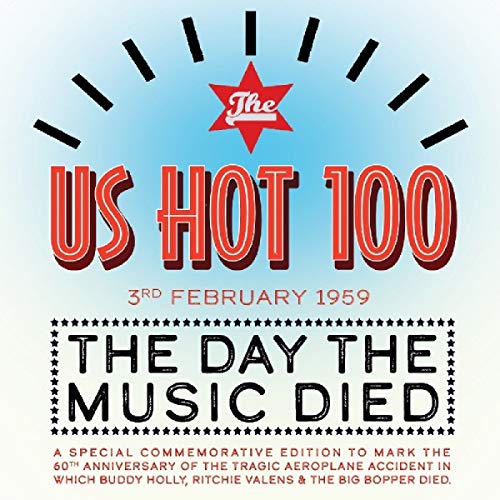 As adjuncts to our highly popular America’s Greatest Hits series of collections for each calendar year in the 50s and early ’60s, we have already produced collections based on landmark moments in the Billboard charts – The First Top 100 Nov. 1955 (ACQCD7062), The First Hot 100 Aug. 1958 (ACQCD7083), The First Hot 100 of the ’60s (ACQCD7097), and The ‘Heartbreak Hotel’ Top 100 (ACQCD7122) each comprising all the records in the Top 100 for the date in question. This collection commemorates the 60th anniversary of another significant musical landmark, and comprises the complete Top 100 on the date when Buddy Holly, Ritchie Valens and The Big Bopper died when their light aeroplane crashed in Clear Lake, Iowa, when travelling between tour dates. The event later became known as The Day The Music Died after singer/songwriter Don Mclean described it in this way in his 1971 No. 1 hit American Pie. For countless music fans, it certainly represented a genuine tragedy, since Buddy Holly in particular had proved himself to one the great songwriters and influential performers of the rock ‘n’ roll era, and caused the inevitable question to be asked as to what he might have gone on to achieve. Interestingly, of the three artists who died so tragically, only Ritchie Valens had records in this particular chart, but inevitably the Top 100 from that time is a fascinating and entertaining snapshot of that moment, including many musical obscurities and one-hit-wonders not widely available on CD, which give a fascinating insight into the music of the time. It contains a 12,000+ word booklet featuring

Welcome To My Blues