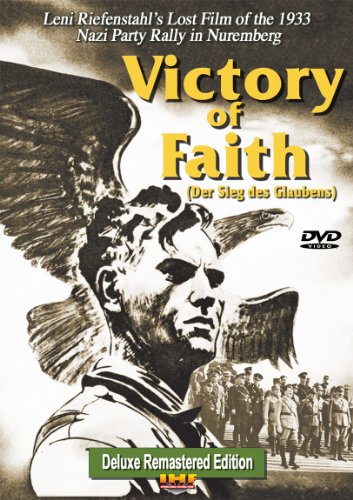 Considered lost for nearly seventy years, Leni Riefenstahl s Victory of Faith is again available to viewing audiences. A key work in the evolution of Nazi propaganda, Victory of Faith provides an ambitious record of the 1933 Nazi Party rally at Nuremberg, and a fascinating first draft of the ideas and techniques Riefenstahl would pull off so powerfully in her subsequent Triumph of the Will. The Nazi movement portrayed here is still raw, not far removed from its street-fighter origins; its stagecraft as yet undeveloped. A unique glimpse into the Hitler state at a pivotal stage in its early development, this is essential viewing for students of film, the aesthetics of power, and the Third Reich. Directed by Leni Riefenstahl. Germany, 1933, B&W, 62 minutes (Plus 13 min. bonus short), German with Optional English or Spanish subtitles. DVD SPECIAL FEATURES