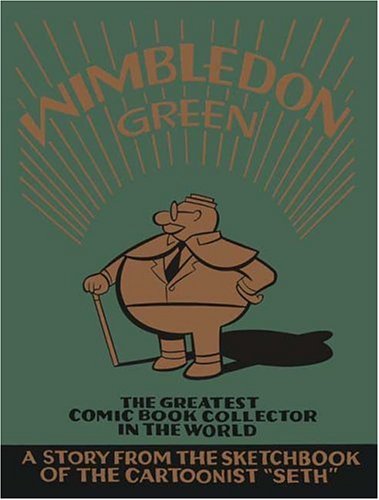 From the critically acclaimed cartoonist of Clyde Fans and It’s A Good Life comes a humorous graphic novel on the obsession of comic-book collecting.

Taking a break from the serialization of his saga Clyde Fans and the design of The Complete Peanuts, critically acclaimed cartoonist and illustrator Seth creates a farcical world of the people whose passion lies in the need to own comic books and only in pristine, mint condition.

Meet Wimbledon Green, the self-proclaimed world’s greatest comic-book collector who brokered the world’s best comic-book deal in the history of collecting. Comic-book retailers, auctioneers, and conventioneers from around North America, as well as Green’s collecting rivals, weigh in on the man and his vast collection of comic books. Are Green’s intentions honorable? Does he truly love comics or is he driven by the need to conquer? Lastly, is he really even Wimbledon Green?

A charming and amusing caper where comic-book collecting is a world of intrigue and high finance. Part riotous chase, part whimsical character sketch, Wimbledon Green looks at the need to collect and the need to reinvent oneself.

Everything You Need to Know When I’m Gone – End of Life Planner for Affairs and Last Wishes: A Simple Guide for my Family to Make my Passing Easier